It was not quite spring today, that transition period where you’re not sure whether it’s warm enough. To hedge my bets, I went out in full winter regalia–down coat, cap, and gloves–then unzipped the throat, took off the hat, and the gloves. Tonight’s dinner was something like that. A delicate chicken soup for a stomach that’s still tender, for getting over the stomach flu.

The “stock pot” as I call it, came with the teeny tiny apartment (2 rooms and a bathroom) and it is really a saucepan. At 11 this morning, I set the chicken stock to simmer–not boil–because I want to avoid that awful scum. I threw in what I had on hand: chicken scraps, half an onion, celery pieces, and a few frozen string beans. Then I waited.

At about 5 pm I strained the broth and wiped out the pot and poured the broth back in again. This time I set the heat on medium-low. I diced a carrot and two celery stalks and threw those into the broth to cook. I tasted and seasoned the resulting soup.  I thin-sliced a chicken breast and set it aside. Then I boiled a pot of water and put in a package of fresh noodles to cook until al dente. I put some chopped scallion and a handful of chicken pieces in a soup bowl, then ladled some hot soup over it. Using a spoon, I braised the chicken in the broth until it was no longer pink. I added more soup, noodles, and garnished it with cilantro. 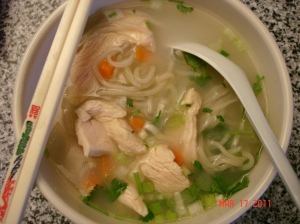 I was so pleased with myself for making something light and nourishing. I was feeling quite virtuous until an hour later when AJ complained, I’m still hungry.  Chicken soup is indeed good for the soul but doesn’t satisfy the hungry man.

Tell me what you think! Cancel reply