Sichuan pepper is actually not a pepper at all nor is it related to black pepper. If it smells and tastes familiar that’s because it is a common ingredient in Asian cooking, particularly  in Five-Spice Powder. To me it has a sweet smell, almost like cinnamon, and like cinnamon, it is somewhat bitter. Use it in small quantities because although it does not have the heat of the more familiar peppers, it does have a numbing effect on the tongue. To me, water tastes salty after eating too much Sichuan peppercorns! 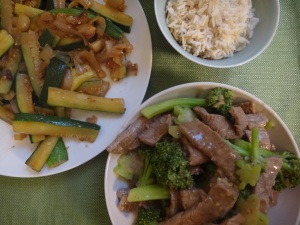 This is a variation on the popular dish in Chinese restaurant menus. The beef is tender and the broccoli is crisp tender, with a hint of sesame. In Chinese cooking, sesame oil is used to flavor food after it is cooked. It is too delicate to stand up to heat in cooking. A little bit, like a teaspoon, is  enough. I serve this beef broccoli with Sichuan pepper with brown-white rice mix because AJ thinks brown rice alone is too dry. The ratio is 2:1 brown rice to white rice.

Blanch broccoli florets in a pot of boiling water until bright green, 2-3 minutes. Remove from heat, drain, and place under cold running water to stop the cooking process. Drain and set aside.

Put canola oil in a large wok or skillet, and turn up the heat to medium-high. Add the ginger and garlic and cook until fragrant, about 30 seconds. Add the beef and stir-fry until it begins to brown, about 30 seconds. Add the broccoli and toss to heat through. The beef should have pink streaks. Remove the pan from the heat and add the sesame oil. Taste and adjust seasoning; adding a little soy sauce, if desired. Serve immediately with steamed brown rice and Japanese Zucchini Stir Fry.

I found this recipe in Real Food Real Easy (2010) by George Stella. The recipes in this book use just a few ingredients (not more than nine) and the method is simple and straightforward. I really needed this cookbook since I started a new job this week, and I haven’t had much time for anything complicated. So this marks a return to my roots–simple stir fries with fresh ingredients.

Tell me what you think! Cancel reply