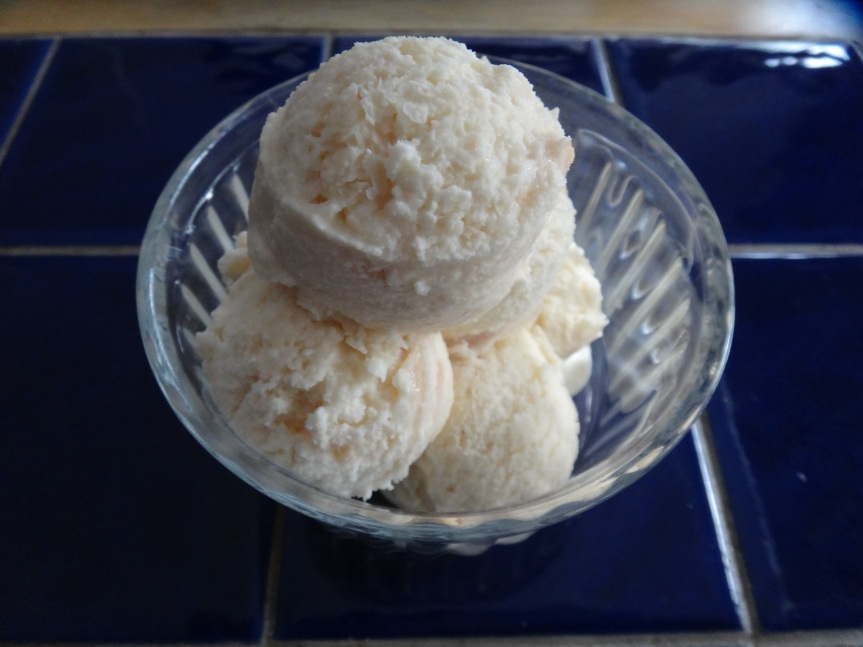 For this blogpost, I thought I’d revisit a childhood memory, my Dad’s ice cream. My Dad’s ice cream is creamy, sweet, and redolent of condensed milk. My Dad flavors his ice cream with tinned lychee or longan with the syrup thrown into the ice cream for good measure. Lychee and longan  both have a woody shell that is peeled open to reveal the fleshy fruit inside around a shiny black stone. When fresh they have a chewy texture; while longan is delicately sweet, the fresh lychee is tart. Both of them make wonderful additions to ice cream.

Place cream, sugar, if using, and egg in a saucepan. On low heat, heat the mixture, stirring constantly, until the liquid reaches a temperature of 160˚F on a candy thermometer. Remove from heat. Add vanilla, condensed milk, and reserved syrup. Stir to mix well. Pour ice cream base into a covered bowl and chill thoroughly 2-12 hours.

Pour chilled ice cream mixture into the ice cream canister, and freeze according to the manufacturer’s directions. Serve immediately or scrape into an airtight canister and put into the freezer to harden.

(Thank you, Andrew Zimmern for coining that original tagline for Chinese-Jamaican.)  These are my Aunt Cela’s recipes that I grew up enjoying all these years. I brought them with me to the US and then to Thailand.

The first thing I used to do was make the dark fruitcake or black cake. I started soaking the fruits in brandy back in September and baking the cakes in early December so they could soak in rum. But fruitcakes being what they are–heavy, sticky, and sweet– I could never get the family to take to the idea of eating a slab of rum-soaked fruit baked in  a cake and topped with brandy butter sauce.

In the family, I had greater success with the roast turkey and the accompaniments: giblet gravy, bread-potato stuffing, potato salad, baked ham, and cranberry sauce. Now that my daughter is married, she is making her own Christmas traditions. Hopefully someday she will turn to her own multicultural heritage for inspiration. 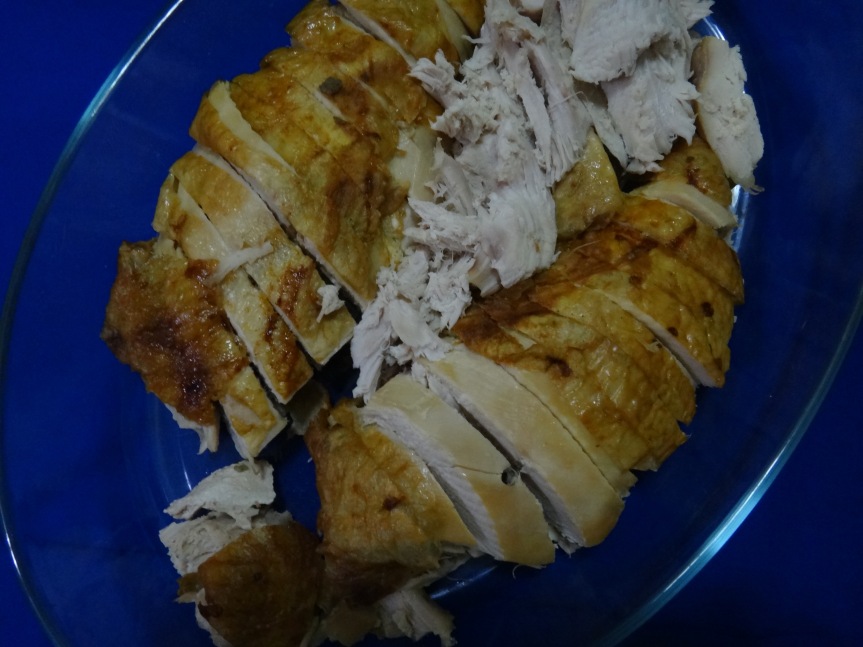 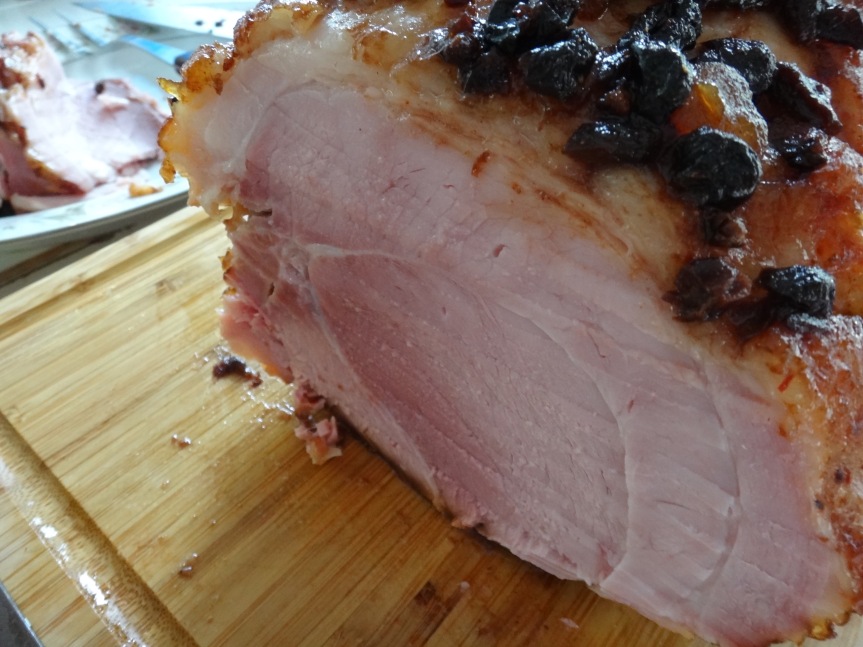 I used to make this with pineapple slices but I found this recipe on the Better Homes and Gardens website and loved it, so I make it instead. Some traditions, unlike the fruitcake, are easy to adapt.

This stuffing is not heavy; it has interesting herbal flavors that have been  absorbed by the bread and the potato.

Cook’s Notes:
• Instead of stuffing the bird, season the stuffing with poultry seasoning or Lawry’s seasoning salt to taste. For a moist stuffing, add a cup of chicken broth. If using chicken broth, reduce the amount of poultry seasoning. Spoon into a buttered 1 ½ -3 quart baking dish. Dot with butter. Bake 350˚F before roasting the turkey or if there is room in the oven, bake it with the turkey for about 30-40 minutes or until lightly browned.
• Make Stuffing in a Bundt Pan. Mix the bread potato stuffing recipe with 3 eggs lightly beaten with salt and pepper. Then brush the inside of the pan with 1 tablespoon melted butter mixed with 1/2 tablespoon flour, making sure to brush inside the crevices. This will help your Stuffing in a Bundt Pan come out of the pan. Pack stuffing into the pan. Then bake 25-30 minutes @350˚F and cool in the pan. Unmold in a plate and serve at once. (from Food Network and A Spicy Perspective)

The giblet gravy is high in iron; it has a complex flavor,  from the tang of the cilantro and kunchai (Chinese celery) to the spicy savory appeal of the Scotch Bonnet/habañero pepper.

I always used to use the tinned jellied cranberry sauce. No more! As they say, fresh is always best.  I had saved a frozen bag of cranberries from last year, and they still  taste fresh!

Rinse the cranberries and set aside 1/2 cup. Put the rest in a saucepan with the sugar, lemon zest, and water. Cook for 10 minutes on low heat to soften the cranberries. You may need to add extra water, 1 tablespoon at a time, if the cranberries seem to be dry and stick to the bottom of the pot. Increase heat to medium and continue cooking 12 minutes or until cranberries burst. Reduce heat to low and stir in the reserved cranberries. Taste. Add sugar, salt, and pepper to taste. Best served at room temperature. 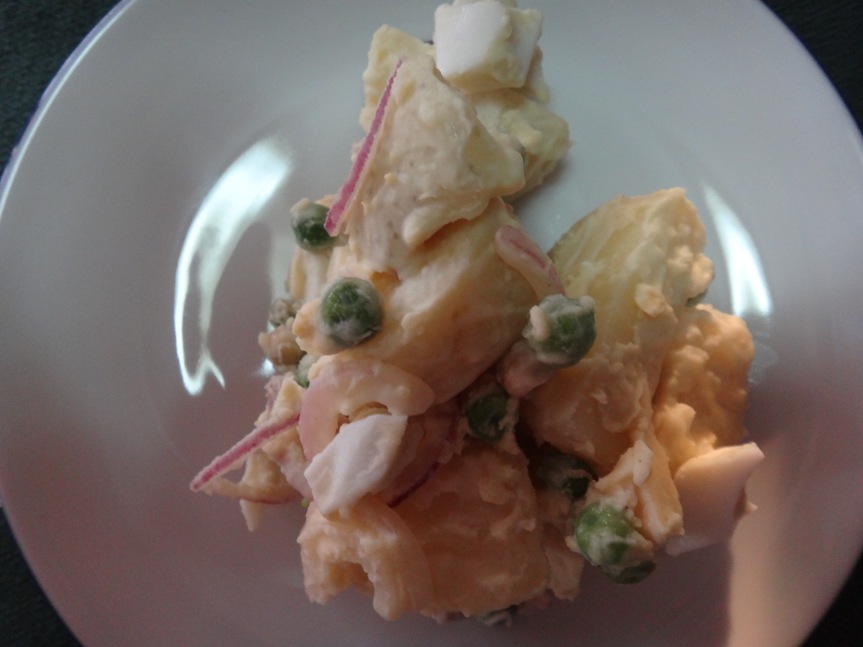 Boil eggs and potatoes as directed. Peel and place in a large bowl. Add shallots.

In another bowl, add the butter and mayonnaise at a ratio of 1:2. Whisk well to combine. Add to the bowl and mix well. Add salt and pepper to taste.

The nicest thing about visiting Calgary is finding out what family foodies are cooking and eating! This recipe is full of shrimp and flavor. The egg, which is optional, adds additional leavening. The tomato helps keep the fritter moist. At my dad’s request, my sister-in-law Lorraine made these fritters for a Calgary Stampede breakfast at home. Our guests requested her recipe because they loved these fritters so much. Lorraine uses very little measurements in her cooking but I like to be scientific so these amounts, except for the shrimp, are approximate.

For the next part, put on a kitchen apron in case the oil spatters. Heat 1 inch of oil in a heavy skillet over medium high heat. Lorraine dips a wet wooden chopstick in the oil; if it sizzles then it is hot enough. Drop batter in rounded kitchen spoonfuls in hot oil, each fritter about 3 inches in diameter. Fry until golden, about 2-3 minutes on each side. If the fritters get brown too quickly, reduce the heat to medium. Fry just 3 fritters at a time. Drain well on paper toweling. Cool slightly. Serve warm as an appetizer or as a snack.

I love this photo of fried yellow chilies because it captures the essence of this fusion. Served with a dipping sauce, these chilies blend Chinese and Mexican food cultures. Recently, a friend in Canada sent me this article. She knows I am a foodie and she knows my family’s history. After all, her family is Chinese-Filippino and they count themselves Canadian. Fair enough.

This NPR article by Lisa Morehouse discusses the culinary hybrid cuisine that developed in the borderlands between the US and Mexico when an upstart import asserted itself: Chinese food meets Mexican food. The fusion also explains why my own family came to Jamaica. Perched on the doorstep to America but unable to enter the US because of the Chinese Exclusion Act, these immigrants, my ancestors, went to other places to live and developed a new cuisine. The common thread throughout the generations: we live to eat. And so we endure.

As a Jamaican of Chinese ancestry, hybridity is not surprising. I grew up eating food that was a hybrid of two cultures. The favorite dish of my childhood: pork and yam. It has a pungent sweet-tart sauce (Chinese) and steamed (BTW Chinese cooking method) with slices of fat pork (Chinese and Jamaicans both adore pork) alternating with slices of yam (Jamaican). Andrew Zimmern of Bizarre Foods sampled this fusion and dubbed it “Chimaicanese.”

My cousin Peter lent me Norma Benghiat’s cookbook and I copied the recipe for pork and yam. I have yet to try it because I cannot find yam, a y-shaped tuber that is essential to this dish. I have an idea to try taro (เผือก) instead. After all, I will be following in my grandmother’s footsteps to create this three-way: Chinese, Jamaican, and Thai.

This dish reminds me of Michael Pollan’s dictum: Eat food. Not too much. Mostly plants. In this next recipe adapted from Cook’s Country magazine, I decided to substitute Chinese sausage for the andouille and to use pak boong or morning glory for the greens. The Chinese sausage (fah chung in Chaimaicanese) added sweetness and texture. The vinegar added a sour note that balanced the garlic and the sweetness.

INSTRUCTIONS
1. First brown the sausage in oil. Add the onion and cook until wilted. Add the garlic and cook until fragrant.
2. Add greens and vinegar to pot and cook covered, stirring occasionally, until greens are wilted
and have released their juices, about 3 minutes. Remove lid and increase heat to high. Cook until liquid evaporates,2 to 3 minutes. For the pak boong cook until the vegetable turns a dull green. Season with salt and pepper. Serve.