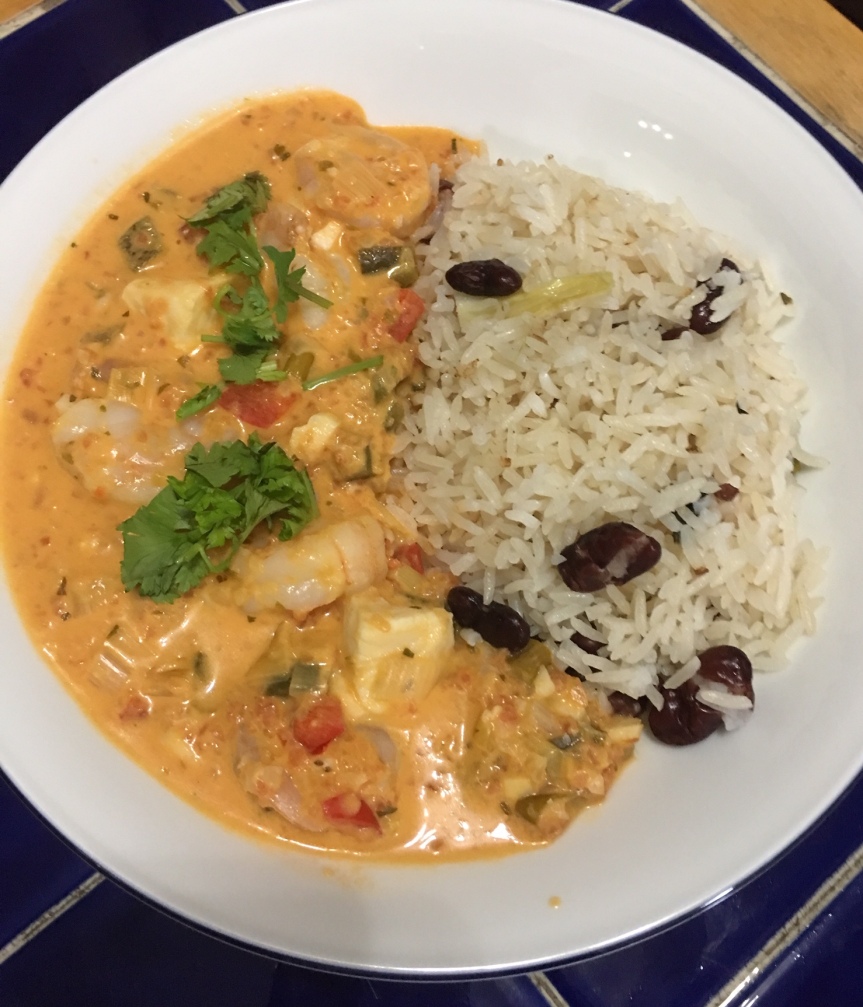 This fish and shrimp stew cooks up very quickly, and is light, piquant, and full of the fresh flavors of coconut milk and peppers, both sweet and hot. I served it with the coconut-flavored Jamaican rice and peas that I had put up in the freezer. Rice and peas is a robust accompaniment that holds its own with spicy main courses such as this stew.

Make the pepper sauce: Process all ingredients in a food processor until smooth, about 30 seconds, scraping down the sides of the bowl as needed. Season with salt to taste and transfer to a separate bowl. Rinse out processor bowl.

Make the stew: Toss shrimp and fish with garlic, 1/2 teaspoon salt, and 1/4 teaspoon pepper in a bowl. Set aside.

Process onion, tomatoes and their juice, and 1/4 cup cilantro in food processor until finely chopped and mixture has texture of pureed salsa, about 30 seconds.

Increase heat to high, stir in coconut milk, and bring to a boil. Mixture should be bubbling over the entire surface. Add shrimp and fish with lime juice, and stir to evenly distribute seafood. Make sure all pieces are submerged in liquid. Cover pot and remove from heat. Let stand until shrimp and fish are opaque and just cooked through, 15 minutes.

If desired, gently stir in 2 tablespoons pepper sauce. Be careful not to break up the fish too much. Season with salt and pepper to taste. Serve with rice, passing the remaining pepper sauce separately.

Cook’s Note: I did not add the pepper sauce to the stew, instead, I served it at the table with the remaining chopped cilantro. 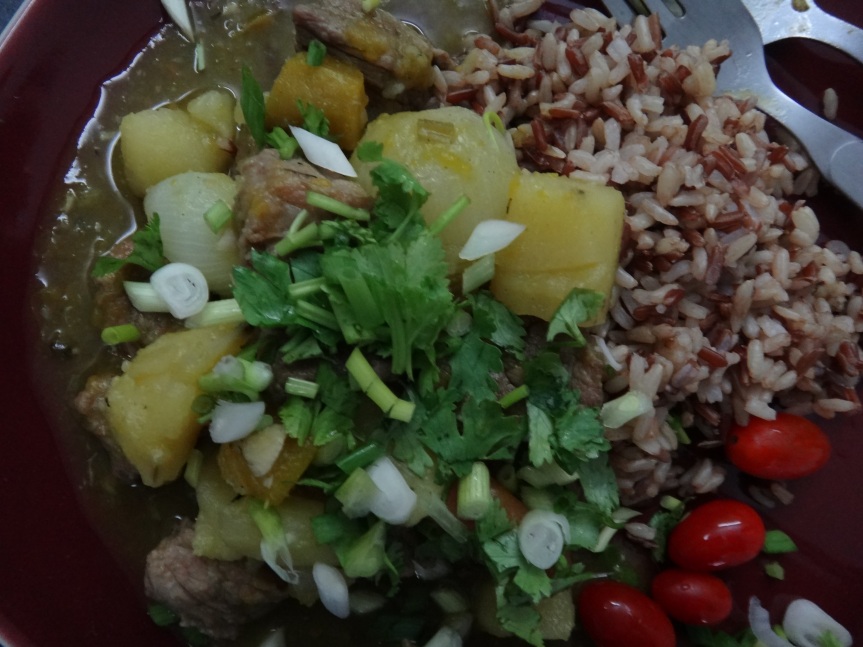 One of the first dishes I learned to cook in college was a beef burgundy stew. I’ve long forgotten that recipe but over the years, I’ve learned how to cook stews. An invaluable lesson I’ve learned is that using red wine to de-glaze a pan is an essential step in creating a delicious gravy. The success of this dish is to forget it–let it cook on the stove on low heat for hours until the gravy thickens and the meat is tender. So good!

Herb Garnish
2 tablespoons Chinese celery leaves, coarsely chopped
2 tablespoons cilantro, coarsely chopped
2 tablespoons scallion, sliced on the bias
Heat about 2 tablespoons oil in a medium pot over medium-high heat. Brown the garlic and Chinese celery for a few seconds. Add the meat and brown it. Add salt and pepper to taste. Pour in the red wine and scrape up the browned bits on the bottom of the pan. Pour the vegetables into the pot. Add the water. Add some salt and pepper. Bring to a boil and reduce heat to low. Let the pot cook about 2-3 hours or until the meat is tender and the gravy has thickened. Taste and adjust seasonings–add some fish sauce or soy sauce or both!

I served the stew beef with red-brown rice. I used one cup red to two cups brown rice and cooked as usual in the rice cooker. I sprinkled the garnish on top of the beef and vegetables. I had a few grape tomatoes so I added them for a pop of bright red color. So simple and so delicious.