Apple Dumplings (adapted from America’s Test Kitchen)
America’s Test Kitchen says: Use a melon baller or a metal teaspoon measure to core the apples. We like to serve the dumplings warm with vanilla ice cream and Cider Sauce (see Cider Sauce recipe below). Other sweet, moderately firm apples, such as Braeburns or Galas, can be used in this recipe.

The Cake Baker says: Use frozen puff pastry to make this dessert quick, easy, and less fuss. I prefer cranberries to raisins so I made that substitution. I had left over cinnamon sugar and butter-cranberry mixture because I didn’t cut down the recipe. But I had another use for them as you’ll see in the cider sauce below.

Cider Sauce (adapted from America’s Test Kitchen)
America’s Test Kitchen says: To make this sauce up to 2 days in advance, reduce the cider mixture until it measures 1½ cups, then refrigerate. When ready to serve, return mixture to simmer and whisk in butter and lemon juice after the heat is turned off.

The Cake Baker says: I left out the cup of sugar in the apple cider reduction. It was tart and slightly sweet because of the cranberries.

Preparation
In a small saucepan, bring to a boil cider and water  plus what’s left of the cinnamon sugar.  Simmer in saucepan and cook over medium-high heat until thickened and reduced to 1½ cups, about 15 minutes. Turn off the heat, whisk in the remaining butter-cranberry mixture from the apple dumplings then add the lemon or lime juice. Drizzle warm over dumplings to serve. A scoop of frozen vanilla yogurt is recommended! 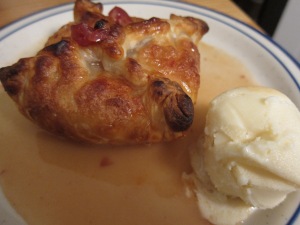 I was walking through the courtyard earlier this week, taking a shortcut through the basement, when I smelled star anise and cinnamon. I thought instantly of Thai beef soup or kao lao. I knew I had to make it this week, even though it’s been years since I last tried. From my years living in Thailand, I know that when it is served with noodles then it’s called kway tieow. I decided to cook it, kway tieow style with Japanese soba or buckwheat noodles, which are higher in fiber and protein, iron and calcium than the traditional rice noodles. Soba like rice noodles is gluten free.  There is  a nutrition comparison of soba and rice noodles on skipthepie.org. If you’re simply watching the calories, as I am, then it’s important to consider that a half cup soba has twice as many calories as rice noodles.

Combine the beef, star anise, cinnamon, and garlic in 7 cups water. Cover loosely. Put two wooden chopsticks across the top of the pot and rest the lid on top of the chopsticks. Bring to a simmer on the stove. After 1 hour, stir the soup and skim the broth of large floating particles. You want a clear broth with tiny particles suspended in the soup when it is stirred. Remove the chopsticks and cover the pot. Once covered, the pot will boil vigorously and some water will boil out. Continue cooking on low heat for 1/2 hour.

Add the fish sauce, salt, sugar, soy sauce, and molasses. Taste. It should be slightly salty and sweet. Adjust seasonings, if you wish. Continue cooking on low heat to develop the flavors, until beef is tender and falls apart easily with a fork, about 2 hours. Discard the cinnamon sticks, garlic, and star anise.  Serve.

To serve, divide bean sprouts and noodles among 4 large bowls. Ladle beef soup over. Serve with little saucers of fish sauce, sugar, sambal, lime, scallions, and cilantro at the table, to season each individual bowl according to taste.