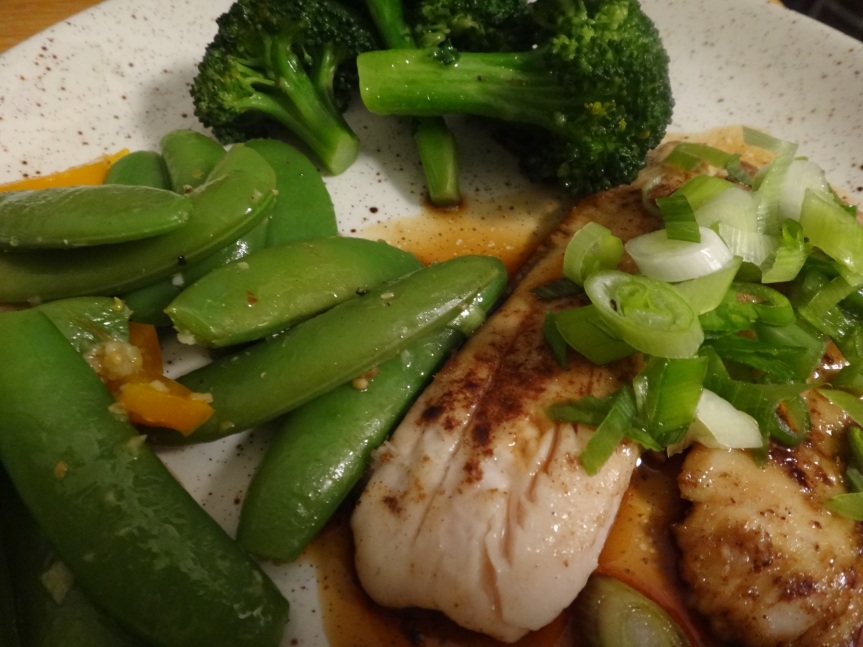 This really was quick and easy! I blanched the broccoli and sugar snap peas for 2 minutes each. Then rinsed and drained them to set the color. I seasoned stir-fried the broccoli in a little oil and seasoned it with sea salt. Then I stir-fried the peppers in oil with a little garlic–two cloves to be exact–then added the sugar snap peas to heat through. Afterwards, I sprinkled the peas and peppers with Trader Joe’s Everyday Seasoning. It’s becoming my favorite! The fish dish has just 3 main ingredients: soy sauce, brown sugar, and five-spice powder. Five spice powder is available from Asian markets. It contains star anise, Sichuan pepper, cinnamon, fennel seed, and cloves all ground up together in a delectable powder.

Preparation
1. Pat the fish fillets dry. Sprinkle both sides of each fillet with five-spice powder and set aside. In a small bowl, combine the soy sauce and the sugar. Stir and set aside.
2. Heat the oil in a large 12 inch skillet over medium-high heat. Add the tilapia and cook until the outer edges of the fillets turn opaque, about 2 minutes. Reduce heat to medium and flip the fillets. Stir the soy sauce mixture and pour it into the pan. Bring the sauce to a oil and cook until the fish is cooked through and the sauce has thickened slightly, about 2 minutes. Remove from heat and sprinkle with scallion. Serve at once. 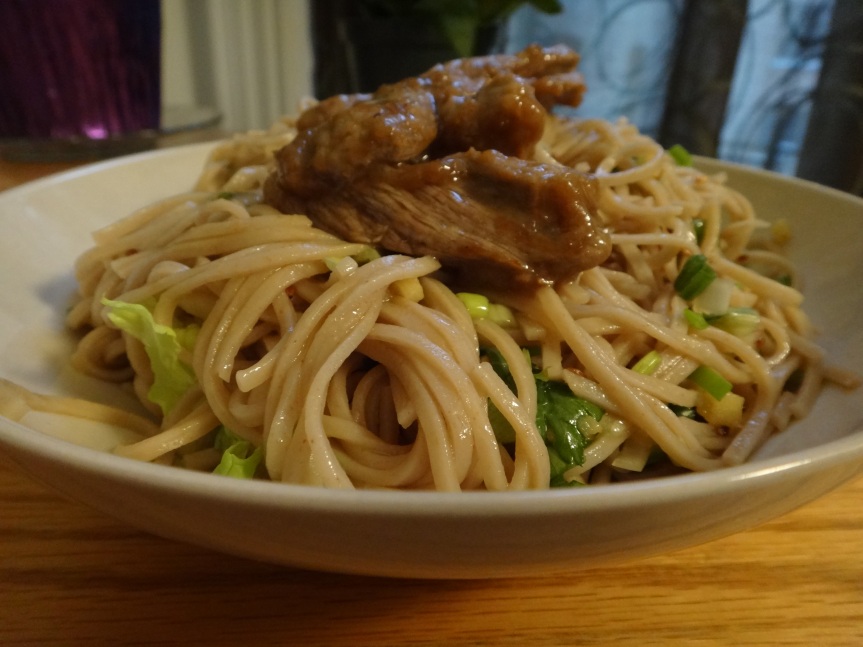 Okay, okay, it’s not vegetarian! That is beef sitting on top of the noodles.

Buckwheat noodles, also called soba, are delicious, as I discovered last week when I added them to the Thai beef soup kao lao. Since I had an extra packet, I decided to try this recipe from a1dente.wordpress.com. I made two tiny adjustments. Instead of chili oil, I substituted vegetable oil and added 1/4 teaspoon chili paste, and I used maple syrup instead of honey.

I also made up my own beef marinade, but you can substitute soy sauce or teriyaki sauce for my marinade, and you can use chicken instead of beef, and firm tofu instead of any kind of meat at all. I spooned the noodles on top of chopped romaine lettuce. It’s delicious, trust me! 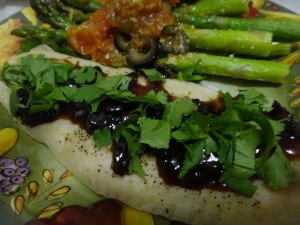 Originally styled “Halibut in Rice Wine” on allrecipes.com, I think any white fish will do for this recipe. Perhaps even a good thick salmon steak. I made this dish by baking instead of grilling the fish and using basa instead of halibut. I’m a great believer in using whatever fish is available at the supermarket. The sauce, you could also say, isn’t even the expected color for a rice wine based sauce. That’s because there is black bean and soy sauce in it. It came out rather sweetish because of the mirin. I think if you prefer it more tart, then add more rice vinegar.

DIRECTIONS:
1. Heat oil in a 10 inch non-stick saucepan over medium heat. Cook shallots and garlic gently until fragrant, but not brown. Stir in black bean sauce, rice wine, and soy sauce. Bring to a boil and cook until reduced by half. Remove from heat, and stir in vinegar; taste and adjust seasonings. Set aside.

3. Grill fish for about 5 minutes per side, or just until cooked through.  Cook’s note: I baked the fish in a 350˚F oven for 10-15 minutes. Watch carefully so that they don’t get overdone. Thinner fillets like basa cook up faster than thicker fillets. The rule is that the fish is done when it flakes easily with a fork.

4. To serve, spoon sauce on a fillet and sprinkle with cilantro. 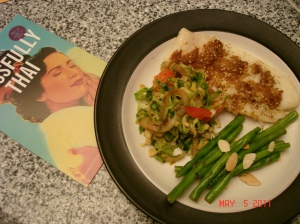 I’m not sure who Troy is.

I tried this recipe from Eating Well because it only has 310 calories per 5-oz. serving of fish fillet. Anyway, I left my steamer in Bangkok and I was too lazy to improvise one so I baked the fish with a quarter cup of water in the pan. I think that could be increased to half cup because the edges of the fillets were a bit dry. The sauce itself turned out to be slightly bitter tasting which AJ didn’t mind but it bothered me. If it bothers you add a pinch of sugar to the sauce. Or sugar substitute if you’re watching calories like I am.

Place the ginger slices on top of the fish and steam. About 7 minutes per inch thickness of the fillet. I baked the fillets in a baking dish filled with 1/4 cup water (recommend 1/2 cup) in a 350˚F oven for half an hour.

Meanwhile, in a food processor work bowl, put the ginger and garlic and process until fine. Remove to a small bowl and add the sesame seeds. In a large skillet, heat the canola or grape seed oil and fry the ginger mixture until fragrant, about 1 minute. Add the sesame oil and heat, stirring. Add the soy sauce. Taste the sauce. If it’s bitter, add a pinch of sugar. 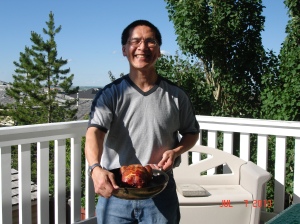 This recipe comes from  the  Better Homes and Gardens Oriental Cookbook. Oriental Cookbook. The title seems so quaint.  It conjures up Conrad, Shangrila, and Indiana Jones. As Edward Said has pointed out the concept oriental is a creation not a geographic reference.  The preferred term now is the regional Asian. I bought the cookbook in the early years of our marriage in the 70s when I was learning to cook. There were a few recipes in it that I went back to again and again: paper-wrapped bundles,  ginger chicken with lily buds, stuffed cucumbers (which Andy insisted belongs in a soup not as a main course), and  soy-glazed chicken.

Like the Chinese Style Barbecued Spareribs, soy sauce is the key to this recipe. I won’t go into soy sauce again so I’ll just note that like the spareribs, this chicken is best when it has been marinated at least 4 hours or overnight. Over the years, I have refined this recipe to my family’s taste and I’ve made it with whole chicken as well as chicken pieces with equal success.  A long time ago, I read somewhere that chicken skin crisps up if baked at 450˚F for 10 minutes then at a reduced temperature of 350˚F to finish off roasting. So I recommend that. America’s Test Kitchen has a video on how to achieve crisp skin chicken but it uses baking powder so I didn’t want to try it as I was afraid it might change the taste of this chicken dish. I did use some of their techniques.

Prepare the marinade. In a small bowl, combine soy sauce, garlic powder, black pepper, oil, five spice powder, and star anise, if using. I created an air pocket between the chicken skin and breast then I made two cuts alongside the backbone near the top and the center. Then place the chicken in a gallon plastic bag and pour the marinade all over it. Refrigerate at least 4 hours or preferably overnight, turning the bag occasionally.

Bake the chicken. Remove the chicken from the bag and discard the marinade. Place the chicken on a roasting rack set over a roasting plan. The teeny tiny kitchen didn’t have one so I covered a rimmed baking tray with double foil and set the chicken to roast on that. Roast the chicken 10 minutes at 450 then reduce the oven temperature to 350. Continue roasting for a total of 1 to 1 1/2 hours (including the 10 minutes) or until the drumstick moves easily in the socket. This chicken is juicy with a hint of anise. The skin turned out golden brown but not crisp as in crunchy–more experimenting needed.