I had such a busy week wrestling with the dissertation that I didn’t have time to post something, but I did have time to cook! What can I say? It’s therapy. So I made this Smilebox collage, and I  set it to Joni Mitchell because Chelsea Morning is all about food. What we’ve got here (clockwise from the top) is: black bean veggie burger on an iceberg lettuce “bun,” roasted sweet potato wedges, and cilantro dipping sauce; zucchini pie with chopped turkey ham; brown rice sautéed in coconut oil; chicken with vegetables; and finally, a simple spinach sauté with a poached egg hat. 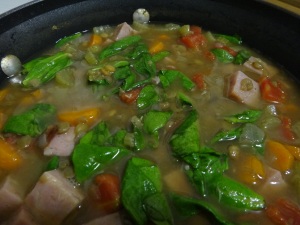 A friend in Chicago gave me a copy of the cookbook from this famous Chicago German restaurant, now closed. This recipe is from that book. I went straight to the soups.  I like lentils because unlike other dried beans, they don’t need to be soaked before cooking and they cook up fairly quickly. I halved the recipe because I am not feeding a crew of eight and I did want leftovers; just not that much. I used low fat turkey ham instead.

I also made my own chicken stock in a 3 quart saucepan using the bones from two chicken breasts, a two-inch piece of ginger, two chopped scallions, and 3 whole cloves of garlic. I cooked it for 1 1/2 hours on low heat, then strained the broth, discarding the solids. Then I set the pot aside. All this is prelude to

Add the stock, lentils, bay leaves, and red pepper. Bring to a boil. Decrease the heat and simmer 1 ½ to 2 hours or until the lentils are tender. [Cook’s tip: Instead of adding the stock to the skillet, I added the vegetables to the stock in the saucepan]

Stir in the ham and tomato and continue to cook for 5 minutes. Add the spinach and adjust the seasonings; simmer for 5 more minutes. Remove from the heat and serve with grated Parmesan cheese for garnish, if desired. 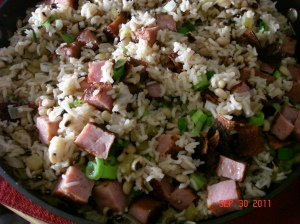 This recipe for Hoppin’ John from America’s Test Kitchen’s Light and Healthy  cookbook was loaded with salt. I decided to try and cut it down by using water instead of low-sodium canned broth, and to cut down on the fat and carbs by using turkey ham and bacon instead of pork.

I don’t have a Dutch oven so I used my Calphalon Everyday pan to heat up the oil. Then I fried the turkey ham steaks 3 minutes on each side. Meanwhile, I crisped the turkey bacon in the microwave.

After removing the steaks to cool, I added the celery and onion to the oil in the pan and fried them until they were tender, about 4-6 minutes. Then I added 6 minced garlic cloves (add more or less to taste) and the fresh thyme and cooked them until they were fragrant, about 30 seconds. Then instead of the broth, I added 4 cups water and two chicken bouillon cubes for flavor, 1 bag (instead of two) frozen blackeyed peas, and the bay leaves. I let the mixture cook for 20 minutes on medium heat. When it came to a simmer, I reduced the heat to low. While the broth mixture was cooking, the ham had cooled enough. I sliced it into 1/2 inch cubes and set it aside.

After 20 minutes, I added the white rice. Now, the original method says to spread a sheet of heavy duty aluminum foil on top of the pan  resting it on top of the rice-broth mixture, then cover. Cook on low heat for 20 minutes, stirring and changing the foil twice during cooking. Then I was to remove it from the heat and let it rest, covered, for 10 minutes.

Unfortunately, this did not work for me. After 20 minutes the rice was still slightly raw rather than just cooked. Either it was the pan, which doesn’t have the high sides of a Dutch oven, or it was the foil which didn’t completely seal all the edges. What I did to salvage the dish was to let it steam-cook on low heat for an additional 10 minutes instead of letting it rest.

Then I tossed in the turkey ham cubes, the scallion, and the crumbled bacon. This version of Hoppin’ John was lightly salted but not very flavorful. The turkey ham was hearty and just like pork, but the turkey bacon is a sad substitute for the real thing. My instinct, from years of cooking rice, is that it is best left undisturbed during the steaming process, and that once sealed, with the foil and the cover, it shouldn’t be opened until the cooking time is up. I will have to try this recipe again to test this theory. Or try it next time in the rice cooker. Like my foray into baking meringues and pavlovas, Hoppin’ John is a work in progress!